CONTESTANT # 1  |  Johnny is your Mr. Virginia Bear 2017. He was worked very hard with the Virginia Bear Crew for the past two years raising money for LGBT Charities and representing the Bear community. Throughout his reign he preached his message of Unity to the people of Virginia, working hard to bridge gaps in the community. Now with his title reign over, he still acts as the treasurer of The Virginia Bear Crew. He is also a newly added Associate Member of the Knighthawks of Virginia. In his personal life, John is a proud father of three beautiful biological children. He also works as collection analyst and remarketing coordinator for a local credit union. He is also working very hard as a full time student in his senior year working toward a Bachelor’s Degree in Accounting. He can proudly say in his two semesters back in school he has achieved Deans List for both semesters. Being a gay father is something John is extremely passionate about. He works hard to reach out to other gay parents to help with their struggles and promote the end of the stigma that same gender parents are less than their heterosexual counterparts.

CONTESTANT # 2 | I am a 52 year old man that has tried to make a difference. I have been out a little more than 7 years when I got a divorce. Since then I have ran in different contests and helped raise monies for several different charities. I was Kentucky Bourbon Bear 2012, North American Bear Hunter 2013. I then won Derby City Bear in 2015, then North American Muscle Bear 2016! I like meeting people and working on things that can help the community. I am a founding member of the Derby City Sisters of Perpetual Indulgence. I am a fully professed sister. I have worked on many charities for not only the LGBTQ community but the community at large. I have helped raise funds for Lexington’s movable feasts, the humane society, Louisville’s Arrow Fund, House of Ruth, Raised funds for LGBTQ veterans for Pride to educate those veterans on their benefits they are entitled to have. Help raise money for Kentucky Pride Foundation, KY Aids walk, Mr. Friendly, Trans Women National, WHAS Crusade for Children, Pug Rescue, house funds for the Derby City Sister’s general house funds and exequatur. My duties ranged from organizing events, selling raffle tickets, raffle baskets, selling jello shots, modeling underwear, performing and singing songs as the Sister Ginger HolyWood and other functions as needed. I have a wonderful partner, an adult son, a dog, a cat, a bird, and fish. 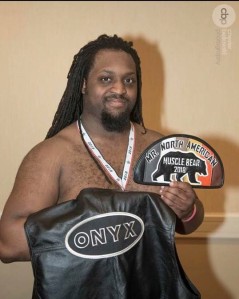 CONTESTANT # 3 | Monolith has been part of the Bear community since 2013. Since then, he has held the title of Mr. North East Ohio Bear 2015, Mr. Cleveland Bear 2017, and is the current Mr. North American Muscle Bear 2018. Monolith is a full member of ONYX Great Lakes (Phenomenon Line) and is active in his local LGBT+ community. He has volunteered for the AIDS Taskforce of Greater Cleveland for multiple years, was an Executive Board member of his universitys’ Gay-Straight Alliance, and is the coordinator for Arktos Bear Groups’ annual run. Monolith understands that being a title holder is about being a visible, active, and contributing member of the community represented by the title. 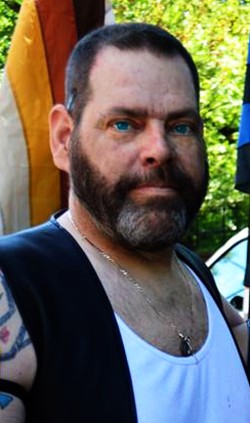 CONTESTANT # 4 | Describing myself is not a simple task. I am just a humble man who proudly identifies as a bear who drives a Semi for a living. Raised in Phoenix, I have lived in the Chicago suburbs for the past 26 years. I’ve learned to love the things in life, big and small and to find good in everything that is put in front of me. I don’t take life for granted, and I enjoy every day as best I can. Volunteering my time gives me such joy, and I endeavor to reflect as much of that light and happiness into other people’s worlds as I can. I give my time and energy to a multitude of organizations on the local and national levels, both within the LGBTQ+ community and in the muggle world, because I feel that only when we work together, can we truly call ourselves a community.

CONTESTANT # 5 | I am a 47 y/o man. I play many roles in life: husband to Mike, father of Courtney and Jensen, grandfather of Chip, Registered Nurse, loyal friend, caring soul. I am self directed and tend to walk to the beat of a drum I’m drumming. I love nature and history. I’m passionate, loving and sexual. I’m also an available weekend boyfriend/lover/hookup to those interested…like you, you, and that whole group over there! 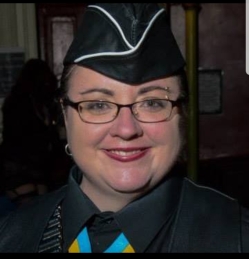 CONTESTANT # 6 | Nikki Wireman is LezBear, a leather dyke, and Ms. New Jersey Leather 2014. Also a paramedic and Level III firefighter, she advocates for those who struggle with PTSD and is first responder to any needy chicken wing suffering from boring dipping sauces.

A lover of craft beers, Nikki loves her community even more. She is an artist currently working in the medium of pointillism to create filthy art that tells our stories, depicts the beauty of the queer community, and has the power to heal our physical and spiritual wounds. Over the last two years, she has donated original artwork that has raised over $1,000 for worthy causes in our communities, including the Mazzoni Center in Philadelphia and BQIC (Black Queer and Intersectional Columbus).

Nikki’s life of activism began in the late 1980s, when the AIDS crisis rose to staggering levels. Watching her older friends and members of her chosen family succumb to illness and eventual death changed her life forever. She continues to teach and promote safe sex and play that is also FUN! 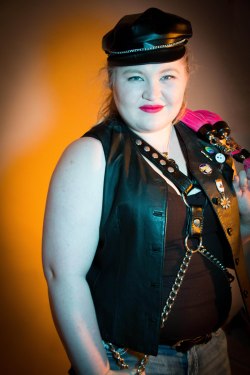 CONTESTANT # 7 | Sure to leave a trail of pink lipstick in her wake, Courtney or Mamabear, is 25 from the Louisville area where she lives with her Dads Dan and Michael, Partner Cub and fur babies. As a Service Top she enjoys educating and offering conscientious introductions to newcomers with Cub, Boy Benji, and Pup Barron. She is inspired by her dads and their drive for bear and leather community . After serving as the Derby City Bear board of Charities officer in 2017, Courtney went on to create the Klondykes and Produce the Not Your Average Bear Contest which advocates sex and body positivity for all gender identities in the bear community. In a Dress or Jockstrap, she campaigns, produces or helps to pull it all together in the back like a good corset. She is sure to find a way to be involved and active in her community. When not traveling to events, Courtney enjoys being among loved ones, being a book worm, and working on DIY repairs. She flags pink, teal, hunter green on the left an red and houndstooth on both sides. If you’re looking for a hands-on approach to your greeting, then you’ve found just the Bear!

COMPETING FOR THE WORLD CUB 2018 TITLE

CONTESTANT # 9 | Zach was born in Texas but grew up in the suburbs of Philadelphia — The City of Brotherly Love and Sisterly Affection. Zach is a digital marketing professional, but his real passion is working for Terror Behind the Walls, the worlds largest non profit haunted house, which he has worked at for 16 years. In his spare time, when he has any, he enjoys raising money for his local LGBT health and community centers and volunteering behind the scenes in community theater. He tends to be shy, quiet and socially awkward, but, he’s able to shed that shell (or at least fake it) if it means doing good for his community. He also supports his community in one of the most subtle but powerful ways- he votes! Mostly, Zach just tries his best to live by the words of the late Mr. Philadelphia Leather 2015, Jason Hall- “Don’t be an asshole.”

CONTESTANT # 10 | I believe in chivalry, being kind and compassionate to others, and giving til it hurts. When I’m not working you can find me bouncing all around Hampton Roads, spreading a message that tears down the stigma around HIV and AIDS. I donate my time, and money to many non profit organizations that benefit the local LGBT community, as well as organizations that help the homeless. Being a proud Vegan and a compassionate animal lover, I volunteer with the Save the Bay foundation to help clean the Chesapeake Bay and other waterways from plastic debris, and I volunteer and donate at my local no kill shelter for dogs and cats. 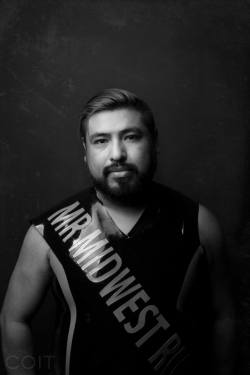 CONTESTANT # 11 | Pup Icarus has spent the last few years spreading the Gospel of Rubber Love and Peace, and encouraging other kinky folk to take part in the shiny rubber fun.  He has been apart of the rubber/latex community for over 5 years and is one of the co-hosts for the POC Rubber meet up at MIR (Mr. International Rubber).

He is also a member of M.A.F.I.A. (Mid-America Fists In Action), an associate member of C.P.P. (Chicago Puppy Patrol), and a supporter of the Chicago Rubbermen, C.A.G.E (Chicago Area Gear Enthusiasts) and Equality Illinois. He has also raised funds for TPAN, Howard Brown, the Chicago House and his own non profit theater company, The Cuckoo’s Theater Project. Pup Icarus wants to encourage you to try latex once, you just might like it!”

CONTESTANT # 12 | My name is Cutlar Shell, I am from Lubbock, TX and current Mr. TBRU Cub 23. I am 26 years old and currently a Psychology major at Texas Tech University. I am the founder and president of the Hub City Bears, a social group bring the LGBTQ+ community of West Texas together in friendship, brotherhood, and community. We may be small, but I already have high hopes for the community!  Throughout my life, I have struggled with depression, anxiety, and body dismorphia. This has only furthered my drive to help others who may be dealing with the same struggles. I have found comfort in both the Bear community and the leather and kink community. I have worked and traveled with the local pup pack, spreading visibility and fostering conversation with those who may be interested or misinformed about BDSM culture. If you see a stray pup running around, I promise he is friendly! PupDion loves skritches and belly rubs!

CONTESTANT # 13 | My name is Benjamin Benton, I was born deaf which has made it difficult in my life, but I would never to let it to get me down. I am currently living in Indianapolis, IN and I work at Untied Parcel Service. I’ve been working with Midwest Bearpacks, Hoosier Rainbow Alliance for the Deaf, and Indy Pride for a while, with which I was finally able to host a Deaf Pride recently during Indy Pride week, it was very success for our first ever of that event.

I am 6 months new to the leather community/scene.
I am the Alfa of my pack which is I.N.K.
I am a auto mechanic by professional trade, fixing everything from Diesels to lawn mowers (Insert laugh). When I am not playing my games or spending time with my partner, I am fundraising… which is most of the time. I am a huge gamer, and I build my own computers for playing. And I love playing on my PS3 or PS4.

Available ONLY at the Door

Have questions about the World Bear Weekend?  Don’t hesitate to contact the event producers: